The History of the Libertarian Party 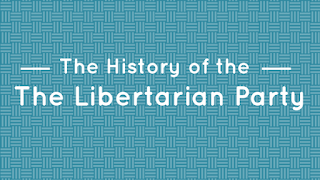 The Libertarian Party caught a lot of attention in the 2016 election cycle. Voters were looking for an alternative in a year with two unpopular Democratic and Republican candidates. This is where Libertarian candidate Governor Gary Johnson came in.


I had the opportunity to work on Gary Johnson’s campaign as the National Field Director. I oversaw ballot access in all 50 states and D.C., planned rallies and events for Governor Johnson and Governor Weld, oversaw all advocacy groups and coalitions, oversaw field and grassroots including local supporters in all 50 states, volunteers, and field staff, and oversaw the distribution of merchandise.
Overall, the 2016 election cycle was the Libertarian Party’s most successful in its history. The party obtained ballot access in all 50 states, raised more money than all previous Libertarian tickets combined, and built an army of thousands of volunteers throughout the country, resulting in the Libertarian’s highest vote total and percentage of the vote in history.

What is the Libertarian Party?

First of all, you’re probably wondering what the Libertarian Party represents. According to their website, Libertarians oppose government interference in their personal, family, and business decisions. Instead, they believe all Americans should be free to live their lives and pursue their interests as long as they don’t harm others. Libertarians think the only role government should have in their lives is to protect them from force and fraud.

Where do Libertarian ideals originate from?

This school of thought originates from the customs of liberal society and the writings of John Locke, Adam Smith, and others. They were cautious of collectivist schools of thought, had a sense that government activism could not be relied on, and were resistant to nationalistic views. Overall, they believed that liberty works better than government intervention.

When was the Libertarian Party established?

Although there were signs of libertarian views in the days of John Locke, the Libertarian Party wasn’t formed until much later in 1971. They had their first presidential candidate, Tonie Nathan, running in the 1972 election.


However, it wasn’t until 1980 when the party really picked up traction when, for the first time, a Libertarian presidential candidate was on the ballot in all 50 states. Edward E. Clark, a lawyer from California, received 921,199 votes in the 1980 election. Although the vote represented only 1 percent of the American people, it was enough to make the Libertarian Party the third largest political party in the United States.


Since then, hundreds of Libertarian candidates have ran for, and won, various positions in public office. In addition, Libertarians have consistently secured a slot on the presidential ballot in every election since 1992. And in 2016, Gary Johnson became the most successful Libertarian candidate ever with a reported 3.3% of all votes, which is about 4,488,919 total votes cast in the election.

10 THINGS TO KNOW BEFORE LAUNCHING A CONSULTING FIRM