Everything You Need to Know About Executive Orders 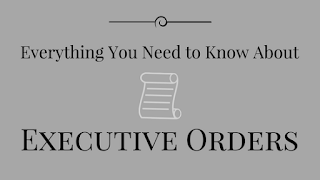 I bet you’ve been seeing these two words everywhere in the news lately: Executive Orders.


Since Executive Orders are very prominent in the news today, you would think this is some kind of new practice. But it’s not; they’ve actually been around for as long as the U.S. Constitution and every president has used them. In fact, it's a very common practice for new presidents to issue executive orders within their first few months of office.


What is the definition of an executive order?


According to the U.S. National Archives, executive orders are official documents that the President of the United States issues to manage the operations of the Federal Government, and mandates specific actions to change an existing governmental practice. They are also one of the most powerful and formal documents out there.


How do executive orders influence our government?


The dangerous game of executive orders.


In addition, presidents have a desire to bypass Congress to mandate orders. Since there are no legal boundaries for executive orders, Congress actually doesn’t need to approve executive orders and they can’t overturn an order -- even if Congress as a whole doesn’t agree with the order.